That was beneath you.

I don't have a job that keeps me staying late at work. No out-of-town conferences. No sexy co-workers putting their hand on my toned shoulder, laughing and turning in slow-motion.

I've been with my wife for so long, I wouldn't even recognize any ex that could show up on a rainy evening, with a broken high heel, scraped knee and a bottle of wine. Not that I have a lot of them any way. [Seriously, I might have more buttholes than legit ex-girlfriends.]

I don't own any sleeveless shirts. And I wouldn't ever cut wood on a hot day, never would wipe my brow with the aforementioned sleeveless t-shirt, revealing the rock-hard abs that I don't have.

The lady next door is pretty old, and if I was ever caught sleeping with her, jealous is the last thing my wife would feel. I'd lean more toward nervous. Or nauseous.

My point? If things ever go south between me and my wife, she has nothing at all to be jealous about. The only place I ever go is...uh...here. The only person I talk to late at night? 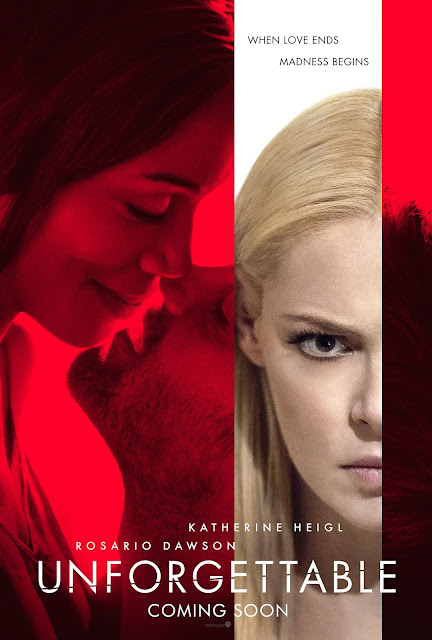 When I saw the preview for Unforgettable earlier this year, I knew I was going to absolutely Redbox the shit out of it. I knew I would happily pay my two dollars and twelve cents (uh, gotta go with the blu ray, right?), and knew that I would unequivocally love hating it. But what I didn't know, and totally should have, was that my wife would fall asleep before the f--king thing even started.

Actually, I'm not really mad at my wife, as she busted her ass yesterday and deserved the early snooze. No my fire and fury is solely reserved for everyone involved in this smoldering garbage can. See, I wanted a glorious dumpster fire to roast delicious f--king s'mores on using only my bad-movie boner as a skewer. But instead, what I got? A lame flick and a limp dick. Here's why...

Julia (Rosario Dawson, hot as ever) has met some dreamy guy and is headed by car in some direction (West, one could only assume) to spend the rest of her life with him. She loses her luggage on the way, but get this, not her baggage. Oh, f--k me. Anyway, it turns out that said dreamy guy is David, owner/operator of a successful brewery, Crazy Slut Ale House. Okay, that's not the name - you got me. Anyhow, detective, David's got a scarily hot ex-wife Tessa (Katherine Heigl, still with a great set of personalities), who, shocking no one, ain't all that stoked to be replaced. But instead of stepping aside like a regular person, Tessa cranks the crazy up to eleven...million... and makes Julia's life a living Hell by always walking around topless and unnecessarily washing really dirty cars.


But what does happen, is more or less f--king ridiculous, just not to the degree one (lonely pervert) would have hoped. Oh, sure, there's a point where Tessa is so turned on by her mischievous antics, she takes out a quarter of a (massive) titty, and perhaps diddles herself under the desk, all whilst instant messaging a previously disregarded psychopath, but even that ain't enough to make this one worth the watch.

Well. At least not alone.


Maybe you and all your sexy friends can spread out on your new KNISLINGE and laugh your asses off at the absurd twists in Katherine Heigl's face, but this old shit-slinger needed a little more, you know? I like a good Lifetime movie as much as the next 'guy', but even one featuring both a soft plot and firm breasts couldn't really hold my interest. Oh, of course I finished it, but you know me, that ain't exactly high praise. I mean, every time I shit my pants I usually finish that, too.

But what is likely never to be finished, are the Yays and Boos. I took a shit-ton of notes during this one, which is either extremely noble or extremely pathetic. But unless you want a post that's just a list of synonyms for breasts, you're gonna have to trust the process. Sad as it may be.


Yaaaaaaaa...
...aaaaaaaay!
Booooooo...
...ooooooo!
My wife and I managed to see an actual movie tonight (like, in the theater/all the way through). We even came home and watched an episode of Jessica Jones afterward. It was amazing, really.

How could we do this, you may (not at all) be wondering? We dropped the kids off at my mom's earlier for a sleepover. But before the night could progress any further...she fell asleep. Again. And you know what I did as soon as I saw her nodding off? Yep. You guessed it.

She has no idea where you live. Nor where to buy all the pig's blood.
Posted by m.brown at 2:06 AM

Email ThisBlogThis!Share to TwitterShare to FacebookShare to Pinterest
File this under Foolish Games