I really wasn't looking forward to this one.

From the trailer, it looked like it was another dead parent movie, specifically dead dad, and at this time in my life, that's not a ride I really wanted to take. My daughter wanted to go, however, and as far as I can tell, her dad isn't dead. In fact, that dude is (currently) alive and well.

Even if Pixar is always trying to kill him. 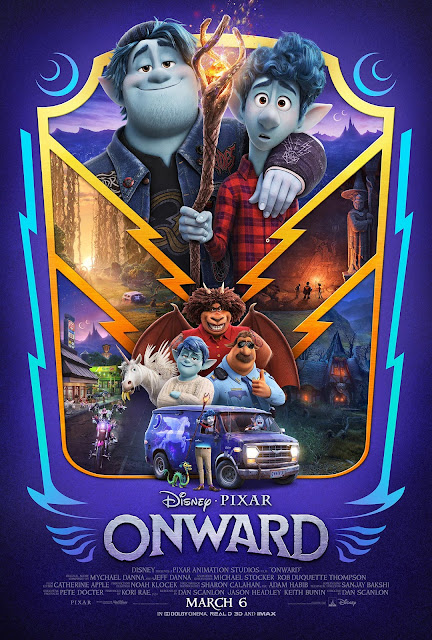 For most of you, the last word you'd use to describe Pixar's Onward would be 'sneaky', but that's probably because you weren't bracing yourself as the lights went down. Assuming that Pixar was coming for my heart with the deceased father angle, I spent a good portion of the first hour steeling myself for the inevitable emotional outpouring. My dad was, at the time, less than a week out from major surgery, so I had to be ready for the moment, which in a way, never came.

It turns out, Onward isn't about the relationship a young boy has with his father (or at least not really). It's instead a rather poignant story about brotherhood and those family ties that have nothing to do with our parents. I grew up as the middle of five kids and being that we've never all lived under the same roof, have punched the clock as the baby, the middle child, and the oldest kid in the house. Needless to say, I saw pieces of myself in both Ian and Barley.

Tom Holland plays the aforementioned Ian, a pretty shy high-school kid, struggling to find his way in the mythical/magical world of New Mushroomton (sounds like my favorite Mario Kart track). His older brother, Barley (Chris Pratt [and somehow not Jack Black]) is a bit of loser, obsessing over role-playing games and consistently (though inadvertently) embarrassing his brother. Barley's a good dude, but when you look at him through Ian's eyes...well, anyone's eyes, honestly...he's a bit...much.

On Ian's 16th birthday, he's not only given a magical staff, but a spell, that if done correctly, will grant him one whole day with his long-deceased pops. The whole thing is a bit overwhelming, obviously, and Ian (with Barley's...help?) botches the spell and ends up with just half a dad. No, not one that's too busy at work or something, or not even one that's like only the charred side of Two-Face, which would have ruled, but instead Ian gets his dad...from the waist down. While this might be good enough for mom, the boys are bummed to say the least. Or they would be, if Barley didn't have a plan. A very enthusiastic, though impossibly ill-formed plan at that.

Shocking no one, our mismatched duo head out on the road with nothing in common but a desire to see their father again. As much as Barley's a bumbling idiot, Ian counters with a tightness that makes Cameron Frye look like Ferris Bueller. The two brothers are going to have to not only make it work, but do it quickly. The next time the sun sets? Dad is gone forever. And in Barley's moderately rad van, it's going to be an excellent adventure.


Speaking of going the distance with someone you don't see eye-to-eye with, here are the Yays and Boos. I left the theater a bit indifferent toward Onward, but after a little deliberation, I think it's an excellent film. Quite possibly the best I'll see in the theater for a long time...wink wink.


Yaaaaaaaaaaay!
Boooooooooo!
It looks like Pixar's next film is called Soul, and thankfully this one doesn't seem to feature parents who are no longer with us. Phew, right? I could use a break from trying not to weep funeral-style in front of my kids. Instead, apparently Soul is about a middle-aged teacher who is struggling with the idea that he's never really going to live his dream.

Totally looking forward to it.

Email ThisBlogThis!Share to TwitterShare to FacebookShare to Pinterest
File this under Twelve Sided Cry