Week one (of at least three) was pretty wild. Staying at home with my kids is essentially our summer routine, but those warm, carefree days include as many activities as possible, and summer madness typically takes place far, far away from the watchful eye of Sauron. (mom's home, dig?)

Clearly these are wildly different times. Like summer, I'm home, but now I'm playing teacher to my two kids, a first grader and a fifth grader, both attempting to navigate their initial foray into the dreaded world of online learning. Eventually, all fortitude and civility break down, and it becomes movie time. Family movie time. And when that's over? After dinner, showers, their second wind and my wife passes out? It's movie time. Again. Without the family.

Here's what went down in round one... 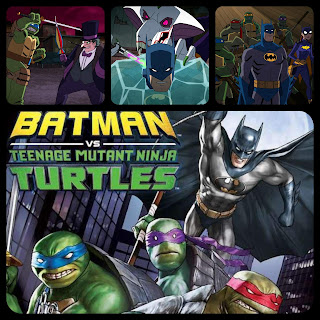 Being that I'd never dipped my toe into the pool of D.C.s' direct-to-video animation prior, this little flick absolutely stunned me. A mysterious gang is snatching up all the tech in Gotham with plans to unleash a chemical agent all over the city. Enter the good guys, a ton of them (Batman's whole crew + the Turts), to kick the ass of a who's who of evil doers (Joker, Harley Quinn, Shredder, etc). Seriously, tell me they're making a $700 million dollar, four-hour live-action epic, and I'll pre-order my tickets now. Assuming, you know, movie tickets are still a thing.

Yay: The action is shockingly hard-hitting, and the comedy, even more surprising, is gut-busting.
Boo: I'm not sure my kids knew what to make of Joker and Harley frenching like/as wild animals.
Homeschool lesson of the day: Teamwork makes the dream work. Assuming your partner is really strong, really rich...or both. 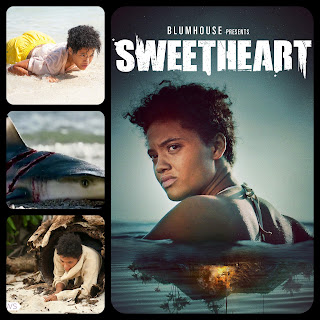 What the Hell is this? A Universal logo? A (mostly-silent) monster movie? Why didn't anyone tell me? Our heroine Jenn would have, after she woke up on a beach, momentarily alone, but she's got work to do, especially when her friend washes ashore. Most of him. Being alone on a deserted island would be terrifying enough, but turns out having company is infinitely worse. See, every night after Jenn calls it a day, a hulking beast crawls out of the ocean looking for blood, and outside of baby sharks (don't you dare, a-hole) and the occasional person Jenn knew, there ain't really a lot of options. Jenn's going to have to handle it herself. Did you ever see the last half of Predator? Jenn did.

Yay: I thought that the hammock sequence was a dream, but it turns out it was a f--king nightmare.
Boo: 10:30 in the a.m., volume fairly low, room totally bright. And I still did a f--king backflip..

Common Thread (Adult Lesson of the Day): In each film, when you think about it, the real monster isn't the giant green creature on two legs.
Posted by m.brown at 5:09 PM

Email ThisBlogThis!Share to TwitterShare to FacebookShare to Pinterest
File this under The Dark (K)Night