Damn. I went to the movies tonight. An opening-night, theatrical showing in eye-popping 3D, no less. That's good news, right? Well, it turns out that I was exhausted. Like, borderline delirious. Things started out smoothly, but then I became this hyper-fidgety madman (I think I changed my seated position over a hundred times). I'm rambling, but there's a point. Take any information and criticism with a grain of salt. I left hating this movie, only because it was attempting to keep me from jumping aboard the Sleepy Town Express. 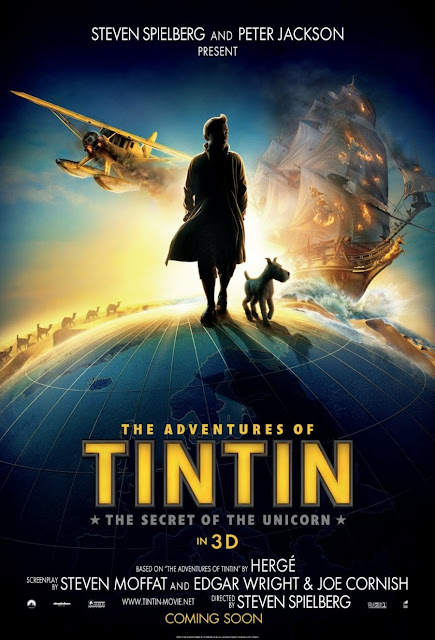 Steven Spielberg and Peter Jackson came together to bring The Adventures of Tintin to the big screen. I hear that this is based on a truly-beloved comic book character, but that means nothing to this simpleton. I wasn't concerned about authenticity or anything like that. With Spielberg and Jackson involved, I would have been there for a Shirt Tales movie.

I realize it's Wednesday, but does it bode well that only four other people were in the theater on opening night? Probably not, as York, Pennsylvania is not quite the burgeoning metropolis it claims to be. I know. Shocking. I should probably go again, but I think I would have to sneak in after seeing something else. I don't feel like I missed that much, but who knows? I actually thought that it was over two hours long, but that's because I was incapacitated due to drowsiness.

Okay, I'm stalling. I hate this. I think every movie deserves a fair shake, and Tintin isn't getting one. That said, here goes...

Regardless of what I may have missed, I know this: the animation is breath-taking. It now feels like we are on the verge of being able to have computer animation so realistic that Tom Cruise will be able to star in Mission: Impossible 68 thirty years after his death. Tintin's characters are indeed stylized with exaggerated features, but sometimes even that can't hide how damn realistic everything looks. The 3D makes it even more impressive. I probably said this to a nine-year old version of myself after watching Who Framed Roger Rabbit, but, where do we go from here? Then I asked myself, how did Roger land such a smoking hot chick?

Since the story gets a little fuzzy for me near the end, I feel like I should let that dog lie. It's not exactly brain surgery regardless, but it does get a bit convoluted (especially when you're blinking for 45 seconds at a time). Basically, the ultra-inquisitive Tintin gets caught up in a web of double-crosses and generational grudges while chasing clues hidden in model pirate ships. And this quest will take him on a video-game like adventure. Water level? Check. Creepy mansion? Check. Sand level (running's so difficult!)? Oh yeah. We even get Motorcycle Challenge, Plane level, and Pirate Ship Battle. I swear we were a Lava Level and an invisible wall away from true 8-bit bliss (although I guess they might've been in there...dammit). Sweet.

Now I realize that I may seem as if I didn't like this movie. That's not true. It moves at a breakneck pace. The set pieces are ridiculous in size and scope and there's nothing the camera can't do. The scene in the street with all the passing cars stands out, but that may be just because it was early on, before I was in a mild coma.

Before I go (I'm stunned you're still here), I want to mention Tintin's dog, Snowy. For some reason, I thought I was going to hate this character, but he turned out to be pretty awesome. True, he probably should have died eleventy-billion times, but I really liked this pup. He's exactly like my dog. Well, except that Snowy's smart. And helpful. And he cares about his master. And he's not constantly licking his junk. Other than that...

Thanks for reading this ridiculously bad entry. Seriously, I feel like I let the team down tonight. Now, I must wear the cone of shame.

Email ThisBlogThis!Share to TwitterShare to FacebookShare to Pinterest
File this under One Two Freddy's Coming For You