That's it. Next time I get to seduce the rich guy. 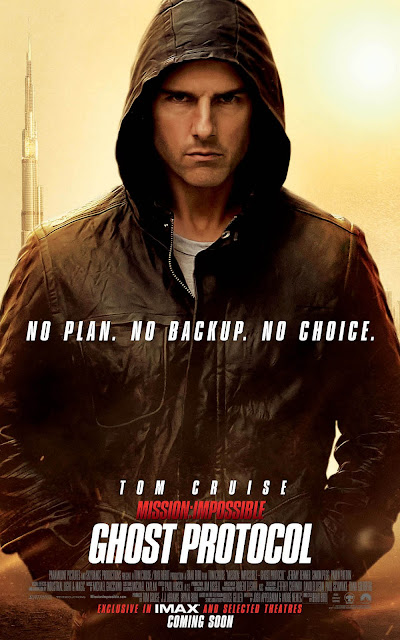 Your mission, should you choose to accept it, is to explain to me why everyone likes this movie. Your explanation should be overly long and complicated and have gadgets that while awesome, really would only work in one situation (I'm looking at you, Mars rover). Oh, and during your explanation, I want you to go to three different countries, simply because you can. Failure to complete your mission simply means that you are reasonably intelligent and attractive. Yes, you must be sexy to attempt any of this.

I rarely make guarantees. Last night, I promised my sister that she would enjoy Mission: Impossible - Ghost Protocol. She hadn't seen any of the first three, but I swore to her it wouldn't matter. It's just going to be kick ass spy stuff and explosions. She called Father Flem, and we rappelled to our local cinema.

A few things first. I really like Tom Cruise. I do. I have enjoyed, to varying degrees, the first three Mission: Impossible movies. So don't think my hatred of this is based on any irrational anti-Scientology nonsense or whatever. This movie just isn't good. It's not flat-out awful, no, but it is definitely not worth the hype. I might have had a decent time if this was critically panned, but 93% fresh? Ridiculous. Almost makes me second guess myself. Almost. But then I remembered thinking that if I had had a watch (do they still make those anymore?) I would've checked it a hundred times. Or, once every time things started to drag between action sequences.

Email ThisBlogThis!Share to TwitterShare to FacebookShare to Pinterest
File this under Me Fail English?