You belong in your own private cage.

I don't know if this counts in true nerdom, but I'm way more of a general nerd than one of those a-holes who goes all in on something. I walk into the [overly-elaborate] (costume) party, dap up as many factions as I can, finish my Bai, and keep it movin'. Sam, Frodo, it's been too long. Oh, shit, looking good, Harry - hey, have you seen Ron? Maybe I'm not going home with anyone, but I'm still going to have a good night.

But you hardcore types, honestly? I'm jealous. While I'm shaking hands and admiring the costume you made yourself, you not only know all the same people I know, but are more than comfortable with fiercely ramming your tongue down the throat and dry-humping the shit out of a film series or TV show both proudly and publicly. You think I'm being condescending, but I'm not bullshitting you in the least: I f--king love people who know their shit. And even better?

When you don't see it coming. 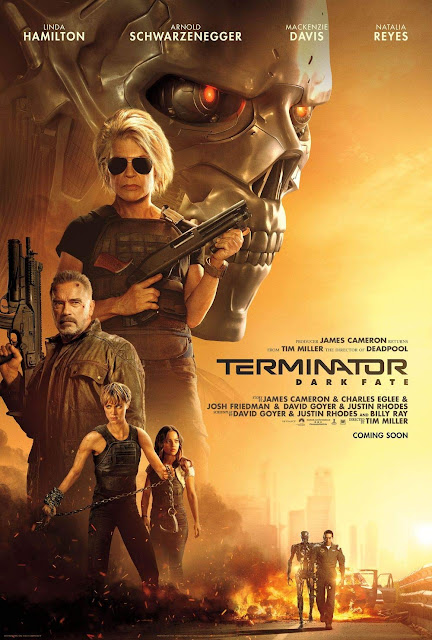 If you met my brother Bryan on the street, you'd think he's a (mostly) normal late 40s guy. Hard-working blue collar dude, with a nice house, a big truck, a lovely wife and and an even lovelier daughter (my niece, weirdos). But if you somehow veered the subject to movies (away from New England sports or the pH levels of drinking water), you'd probably find out he's a fan of the Terminator films - a f--king massive one. And when he gets going on the timeline...it's beyond impressive. And absolutely hysterical.

With a random day off and having the house to myself, I decided to crank up my new soundbar (f--k off, it's the best audio setup I've ever had) and blast the shit out of Terminator: Dark Fate. Had I not been thinking of the conversation I will inevitably have with my older brother (with a dash of Arnold-related anticipation), I think I would have been moderately crushed with this latest sequel. It's not terrible...but goddamn...it could have been so much better.

While we all know time-travel flicks shit all over anything related to a coherent understanding of reality as we know it, the Terminator franchise, at this point (at it's final point?), has totally set the bar for wait, when the f--k did this happen? Maybe if they make a Back to the Future sequel where an elderly Marty McFly runs over a young Emmett Brown with his DeLorean, there will be some conversation, but for now, if you want to a f--ked up timeline, have I got a mostly-human killing machine for you.

In a shocking turn of events, Dark Fate opens with a jarringly realistic Sarah and John Connor looking just as we left them in 1991 (though it's now 1998). They are in some sort of tropical paradise, umbrella drinks and such, when out of nowhere an OG T-800 shows up and finally does its f--king job. John is dead, but the fact they used an older model years later. It's kind of like Apple re-releasing the original iPod, but I guess Robert Patrick was...busy?

Cut to the future, or, well, the present, and it turns out Cyberdine never existed at all. Good news, right? Anyway you look at it, no. No, it's not. Instead of a nefarious tech firm reverse engineering cool shit from the arm of an exoskeleton, the future is ruled by some AI program called Legion, and it's now their turn at sending murderous f--kers back to protect their future selves.

Admittedly, the new tech is pretty cool, with the new Terminator having some amazing features, and our Kyle Reese character is now a badass soldier named Grace. But even with these supposed upgrades, and the inclusion of a grizzled Linda Hamilton (and the return of Arnold Schwarzenegger) I think...we've seen...that movie...too-ooo-ooo.

Speaking of the familiar and (for most of you) nonsensical, here are the Yays and Boos. They too have traveled back in time to do some damage on unsuspecting contributors to the future (that's you, genius). Or they would have. When they showed up naked in the Raiden's finishing move, they couldn't find anybody who wore the same size clothes, so they've disguised themselves as old men 'slowly getting dressed' at the gym. Maybe you've seen them before?


Yaaaaaaaaaaay!
Boooooooooooo!
I haven't had the chance to see my brother since my grandmother's funeral, so I have no idea whether or not he liked Terminator: Dark Fate. My guess is that he didn't, which usually means he absolutely did. Maybe I'll update this post when the next time I see him.

In the meantime, what about you? What franchise do you know everything about? For a lot of my students it's stuff like Dragonball Z and Naruto (which I did that they dig, you know?). Sometimes I ask them about it and let them drop crazy wisdom on me, but we just got two weeks off from school for the coronavirus...and to be honest?

Email ThisBlogThis!Share to TwitterShare to FacebookShare to Pinterest
File this under For Bryan