As week one stretched on, the routine became easier to manage, but harder to fathom. I don't think I've really considered how absolutely messed up this is for my kids, so publicly it's a bit of Hey, this is fun! while privately it's a lot of Holy shit, this is grave. Currently, our only problem is being on top of each other at all times, which if we can all be honest with ourselves, is nothing ever worth complaining about. Hell, we're probably not too far away from desperately longing for moderate annoyances. Or modern conveniences.

But for now, the show goes on, silly and unnecessary as it may be. I'm not trying to make light of this pandemic (but I'm an a-hole, so...), but more so to chronicle it. And as I've been doing for almost ten years here, through the (mostly bad) films I watch. Stay in. Stay safe. And while you're at it, stay frosty. 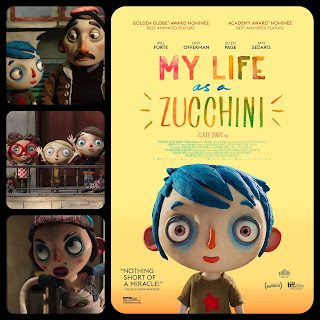 Film: My Life as a Zucchini
Runtime: 70 minutes    Rating: PG-13 (what?)
Audience: Matty and Violet (no Mom, phew)
Status: Confused, concerned...and is this school?

Oscar nominated for Best Animated film? Should be fine. No need to check the rating at all. It's not like it's a movie about death, child abuse, suicide and, wait for it, the exploding willy. What the Hell, France? You can't make something look so childlike, only to have it be so very grownup, you progressive bastards. Honestly, it's a very, very good film, it's just not for little ones, at least not really, but there I was demanding my kids get off their devices and pay attention and read it...at first. If you haven't seen it, it's a delightful tale about a little boy being sent to an orphanage, after killing his mom. If you want to know what happens next, ask my kids. Or their therapists.

Yay: It's a two-way race for silver between Camille and Cop Guy, with the animation taking the gold.
Boo: I always check Common Sense Media before starting a flick with my kids. This time? I trusted the Academy, which we all know, flies directly in the face of common sense.
Homeschool lesson of the day: The good news? Your dad isn't trying to scar you...physically. 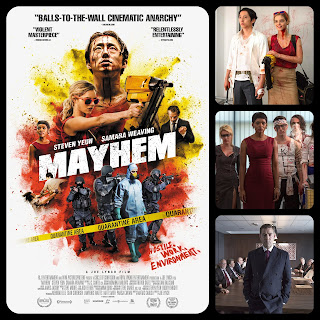 Since I have the immensely original idea of watching a virus movie per week during this effing pandemic, just so I can fully lock-down a-hole of the year status. Up first? My imaginary girlfriend Samara Weaving and Steven Yeun getting trapped in an office building when some sort of rage virus takes over. Staged a bit like a video game, these two team up to head up, to the top floor, naturally, to fight the big boss. Not as violent as I expected, and honestly, not as good, either, this low-budget action/horror flick checks enough boxes...I guess. The idea is pretty badass, with legal precedent exonerating everyone before the madness even begins, but the execution of the resulting chaos falters somewhat. And the fact that it's essentially void of likable characters doesn't help, either. That said, it's not even 90 minutes long, and at this point, though the toilet paper is running out, time seems to be in heavy supply. If low-budge chaos is your thing, you could probably do worse. If I haven't yet, I'm sure I will.

Yay: It make zero sense, but the fact that a nailgun features prominently was much appreciated.
Boo: Ewan shows up to help his boy Derek, and what he gets, he so clearly did not deserve.
Common Thread (Adult Lesson of the Day): If you have to make the best of a bad situation, it always helps to have a friend by your side.
Posted by m.brown at 7:10 PM