Sometimes in order to heal... a few people have to get hurt.

I think it was when I did my taxes for the first time. At least that's what I told myself. Maybe it was in college, when one of my best friends died in a tragic accident - though I definitely didn't take the time to consider it then. Most likely, however, it was the day my son was born - that might be the ultimate welcome to the club moment. But then there's this blog. And well, it's basically thousands of words saying, let's not get ahead of ourselves, a-hole. 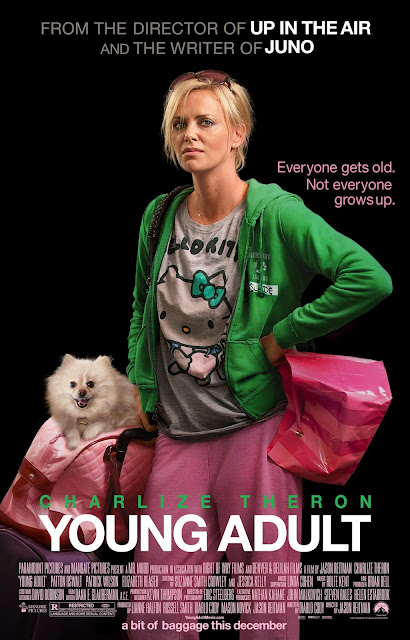 So, when did you officially become an adult? Better question might be, have you? When you're a kid, it's easy to identify grown-ups, they're the old people. What about when you're twenty? It's everyone who's thirty, right? But now that I'm in my thirties, I have no frickin' clue anymore. I'm an adult, but I certainly don't feel like one.

These questions are more eloquently addressed in last year's Young Adult. Charlize Theron stars as Mavis Gary (she has to be the hottest Mavis ever put to film), a ghost writer for a fading YA series. Mavis' life is a controlled mess, but she's a small scale big shot. After receiving a seemingly innocent e-mail, Mavis heads home to break up/destroy the happy marriage of her old high school boyfriend, played by Patrick Wilson. If you're into self-destruction and love painfully awkward conversations and confrontations, friend, have I got a film for you.

Obviously, this is the Charlize Theron show. Maybe it's just me, but she manages to pull off an impressive feat in this flick. She is the ultimate bitch, but she's frustratingly likeable, too. You want to hate her, you need to hate her. In fact, if you don't at least once want to actually punch the real Charlize Theron in the face at some point, consider me impressed. Mavis has not grown up, she has not moved on since high school, where apparently, she was the shit.She talks like a kid, she dresses like a kid, hell, she even eats like a kid.

On the other hand, we have Patton Oswalt. He plays the Hate Crime Guy, Matt Freehauf, to perfection. This was the guy in high school that probably no one went out of their way to be friends with, but turned out to be a very decent dude. He's got his own issues, too, and they are exacerbated by the relentless awfulness Mavis storms into town with. They have a very believable chemistry, giving hope to all partially crippled guys who make bourbon out of their sister's garage. So you saying there's a chance...

Since I'm the one movie blogger guy who didn't see The Avengers this weekend, let's tuck tail and head over to the Yays and Boos, but-I've-watched-a-lot-of-basketball style.

Yaaaaaaaay!
Boooooo!
Wow, I watched this movie on Friday (nap time feature, naturally). I started writing this review on Saturday, continued it on Sunday (two different times) and now am wrapping it up on Monday (evening, no less). Goodness. If I wasn't adult when I started this one...

Oh, and let me tell you. I still feel like a real loser for not seeing The Avengers this weekend. It made eleventy-billion dollars and I was not a part of that. F--k! I hate missing opening weekend.

I guess we can table that grown-up talk, huh?

Email ThisBlogThis!Share to TwitterShare to FacebookShare to Pinterest
File this under I just want to be a Toys R Us kid