What kind of sorcery is this?

If you couldn't tell by the poorly written sentences, the juvenile sense of humor or the constant self-deprecation, I'm a middle school English teacher. Wait, an inner-city middle school English teacher. I spend my professional life trying to convince 7th graders that reading and writing actually means something. Their responses and performances have led me to one single truth: I am not easily offended. 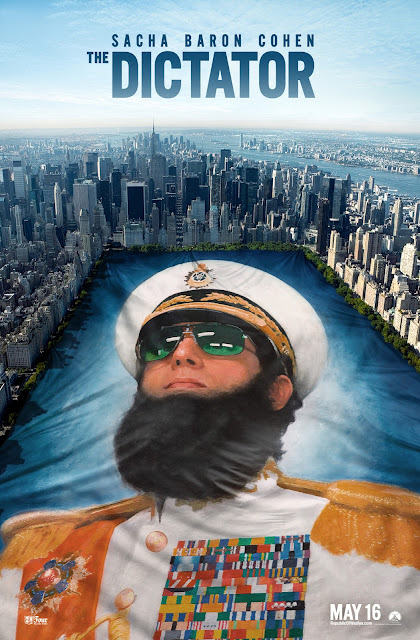 Sacha Baron Cohen has made a career crafting comedies filled with characters who routinely say and do very offensive things. The Dictator continues this trend, but sheds the faux-documentary angle in favor of a more traditional comedy. Don't worry, the hallmarks are still here. Clueless/racially insensitive main character? Check. A journey of an improbable nature? Oh yes. Lots of politically incorrect gags? 10-4. We going to need a dick shot, too, right? Right.

Male nudity is one of Cohen's calling cards, and though it isn't seared into my memory like the fat, naked guy from Borat, or the talking pecker from Bruno, he certainly puts the dick in Dictator. Honestly, this didn't offend me at all. The fact that there weren't any boobs bothered me a hell of a lot more. And no, the milking scene doesn't count. Okay, maybe it does a little bit.

I guess while I'm talking about dicks, I should mention that our main character Admiral General Aladeen is a huge one. In his home country he is a vicious overlord who has people killed for the slightest of offenses. When he gets to America, he unsurprisingly, does not change his ways. To his credit, Cohen again crafts a character we should hate, but it's impossible to. His recklessness and insensitivity actually make him more likeable. Man, if only I could pull that off...

I caught this one on Friday afternoon, so here are the Yays and Boos, the make-the-nuke-pointy style.


Yaaaaaaaay!
Booooo!
As is rather commonplace for summertime flicks, I had a free pass, so there was no money on the line for me. And like my sister has pointed out, I usually don't hate anything anyway. Overall, I think  it was funny enough to warrant seeing, but I'd have your back if you just went and saw The Avengers again.

It certainly wouldn't offend me.
Posted by m.brown at 10:38 PM

Email ThisBlogThis!Share to TwitterShare to FacebookShare to Pinterest
File this under An Aladeen Review