Why do you love me? Because I kill people?

When I was I kid I really loved The Jetsons. I was enamored with the glimpse into the future that the cartoon provided my burgeoning adolescent mind. Flying cars? Entire meals in pill form? Automated assembly line style showers? Sign me up. I imagined that when I reached George Jetson's age, that's how it was going to be. You know, the fuuuuuture. Granted, it wasn't all perfect. Rosie was a real mechanical bitch. 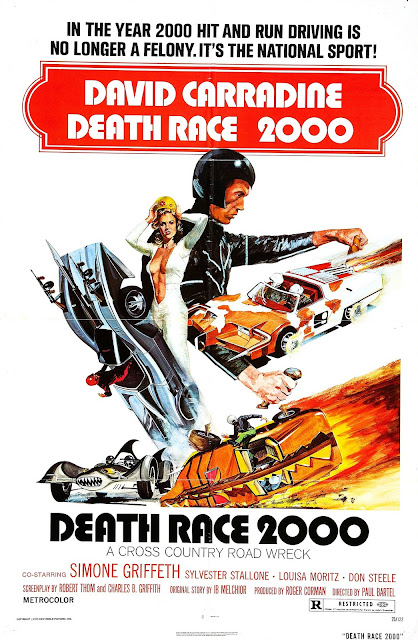 What's slightly more entertaining than a look into the future, is to look back at the past's version of the future that has already occurred. Read it again if you must, but that sentence makes sense. I think. Anyway, my rambling leads me to my late-night viewing of 1975's Death Race 2000. Now, I was in college in 2000, and really didn't pay attention to national affairs, but I'm fairly certain things didn't turn out like this Roger Corman production.

Yeah, it turns out in the year 2000 America has become morally bankrupt and led by an evil dictator, Mr. P. This dude gives us we want, which is apparently televised vehicular manslaughter, of all things. For a three-day period, five ridiculous racers speed across the country running over anybody foolishly outside during the event. Women are worth 10 points, teens 40, and toddlers rack up a solid 70. Oh, and don't forget grandpa, as his old ass is worth 100.

So, for 80 minutes, we ride. Fast. David Carradine and Sylvester Stallone are the main competitors, with two chicks providing the fodder. There's another guy too, and I swear he is the douchey sensei from Karate Kid. Fear does not exist in this dojo! Yes, sensei. I mean, yes, Nero the Hero.

As for the flick itself, it's definitely worth a watch. It's short. It's bloody. And there's even some boobs for you pervy types (ahem, not me). Carradine is an odd dude to watch, but I enjoyed his performance as Frankenstein. Sadly, I can't look at him in his leather gimp suit and not imagine him hanging in a closet, dead, with his pants around his ankles. Then again, that's how I imagine everybody, so I'll deal. Oh, and bonus points for a ridiculously awesome Stallone. His intro scene is just great.

Well, let's run over the head of the Yays, peel out on the ass of the Boos, and instead drive straight to an alternative breakdown, from the year two-THOUsand! 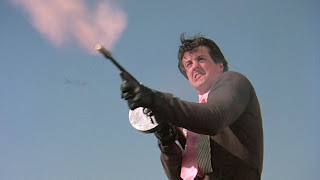 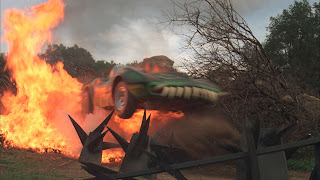 Enjoy your Memorial Day Weekend, and be safe on the roads. It's not like we have flying cars or anything.

Email ThisBlogThis!Share to TwitterShare to FacebookShare to Pinterest
File this under Machine Gun Elroy