You know, sometimes all you need is twenty seconds of insane courage.

Full disclosure: Jerry Maguire is one of my favorite movies of all time. That might give my credibility a shot in the junk for some of you more cynical types, but as a senior in high school at the time, the movie captivated me. Renee Zellweger's character, Dorothy, tells Jerry, I just want to be inspired. As a seventeen year old, I couldn't have agreed more. Sure, there's dozens of other scenes and characters (the Rod Tidwell) I can ramble on about for hours, but that's about as succinctly as I could put it. Why mention this? Well, this past Tuesday my wife and I completed another Cameron Crowe film, We Bought a Zoo. Or as my wife put it, Jerry Maguire with Animals. 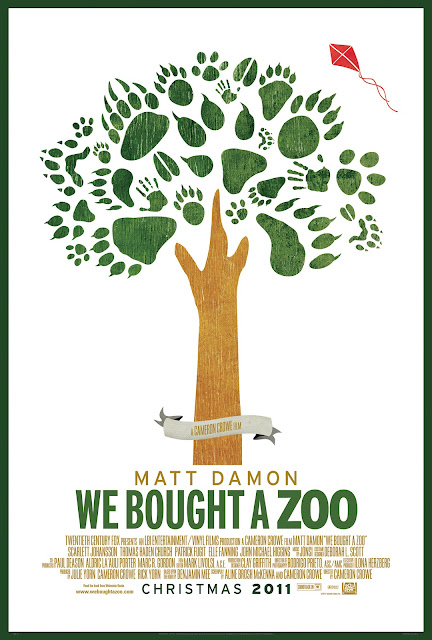 That's not a knock, at least it isn't for me. We Bought a Zoo was a very enjoyable movie, but not quite the family flick it was packaged as (the Blu ray had an Ice Age short in front of it?). It's innocent and downright whimsical at times, and of course the animal footage has a lot of awwwww shots, but there's some serious stuff going on here. At times, I was kind of a wreck. Okay, I just had something in my eye. Well, both of my eyes. Fine, I cried. A lot.

So what brought the waterworks? Well, turns out I don't really enjoy watching a dad deal with his family after he has lost his wife to a sudden illness. Yeah, the Dead Mommy genre isn't my cup of tea. Repeatedly, I imagined myself trying to keep my own family together after the loss of my wife, and it destroyed me. Now, I'm not as dreamy as Matt Damon and my son is much younger than his pair, but that didn't make it any easier to swallow. And to think I got suckered in with frickin' Scrat. I haven't been this devastated in a family film since Marley & Me. Whoever suggested that was a family movie needs to beaten to death with a dead dog. F--ker.

Anyway, I would like to make it clear that I did really enjoy the movie. It's harmless, and at times, very goofy, but I think I'm just a sucker for Crowe. I love his characters. Sure, they're overly cute and quirky, but at the core they're also very good people. Honest people who legitimately risk everything for their families and what they believe in. And to me, that's inspiring. Also, his movies are always full of hope.

An English teacher in college once told me that hope was for the weak, that real people didn't hope, they took action. That guy was a real dick. I hope someone took action and punched him in the balls. On that note, let's break this one down with some Yays, some Boos, and some Jerry's! And let's do it I-am-a-golden-God style...

Email ThisBlogThis!Share to TwitterShare to FacebookShare to Pinterest
File this under We Bought A Sports Agent